Everyone attending Arisia'23 will have to be masked and fully vaccinated for COVID-19, including the bivalent booster, by January 3rd. For details, see the COVID statement page. 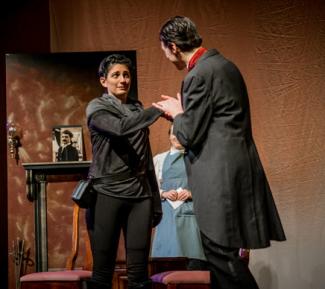 Arisia’s participatory entertainment includes musical happenings, theatrical performances, and dances. Some are participatory, some performance, and some in between. Music includes live performances in the convention open areas (minstrels) and in a dedicated music room. Theatrical events include staged radio plays, and skits. Our afternoon and evening dances range from period-style regency balls to futuristic live DJ sets for a packed dance floor.

Participatory music at Arisia consists mostly of song circles (both themed and open), sing-alongs, and workshops. We also offer open mics and the popular Doom, Gloom, and Despondency song contest. We have recently begun exploring and offering opportunities for participatory instrumental music as well, with jam sessions and play-alongs - the instrumental equivalent of the sing-along. Music performances at Arisia include staged concerts and wandering minstrels. See the schedule for our Music offerings.

Participatory dance at Arisia includes styles as varied as the people who attend the convention. We have dances themed for various historical styles from both the distant and recent past, and dances that anachronistically fuse widely varying styles into something new and different. Some dances include instruction while others are purely social. See the schedule for our Dance offerings.

Theatrical performances abound at Arisia, with everything from the fully staged serialized Victorian adventure plays to historical storytelling to shadowcast performances of classics like the Rocky Horror Picture Show to the Ig Nobels to burlesque to radio plays. For participatory theater, how about parades of strange people singing sea chanteys or playing kazoos as they march through the hotel lobby? See the schedule for our Theater offerings.

To see examples of these kinds of events in the past, visit the archive page.

Images copyright by their artists, used with permission.

Arisia, Mentor of Arisia, winged Arisia logo, and the distinctive A logos are service marks of Arisia, Inc. Unauthorized use is prohibited. Legal Notice

By attending Arisia, you agree to abide by the Arisia Code of Conduct.

If you have any comments, enter them at www.arisia.org/feedback or mail feedback@arisia.org.